I'm ashamed to admit this to some of my more intellectual friends, but I really enjoy watching television. Contrary to conventional wisdom, TV is not inherently inferior to reading a book. In many ways it's even better, since some kinds of information can be conveyed faster and more fully. Clearly, TV has the potential to be both entertaining and informative, but it has a long way to go to reach its full potential. Sure, there are plenty of sitcoms to laugh at and more than enough news to stay current. Yet the TV experience is not really satisfying.

One of the biggest problems with television is the excessive commercials. Thanks to Ronald Reagan, TV stations are free to show as many ads as they want. And do they ever! Even ignoring any harm in the ad content, such as dubious selling practices to children on Saturday mornings, the sheer number of ads degrades and cheapens the medium and insults viewers. Ads run concurrently with closing credits, which are rendered unreadable. News briefs rarely contain news; they're just more ads: "You'll be shocked to hear why Joey Buttafuoco is in the headlines again. Tune in at 11:00." TV stations try to trick you into thinking they returned to the show so you'll unmute the sound, only to find there are still six more ads to go. 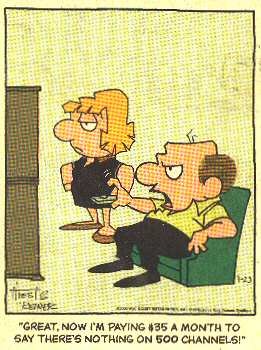 I keep hearing about 500 channels, but frankly that seems silly. There are not enough people to watch that many channels, and the value to advertisers cheapens with viewer thinning. Thus, even more ad minutes would be needed to generate enough revenue, especially to sustain niche stations like those that broadcast in a foreign language or offer specialized education. Further, I now pay about 65 cents per channel per month for "extended basic" service. By extension, 500 channels would cost $325 per month!

The early promise of cable TV was that, in exchange for paying for TV, we'd be spared the commercials and get a wider variety of quality programming. But that never happened. Not only do the cable-only channels show ads, they show lots of ads. Classic reruns and movies are cut beyond recognition to make room for more ads than can possibly be sold, with the void filled by endless station self-promos. Even HBO runs ads - infomercials disguised as "Making of" shows for current movies. Cable operators should pay us for every home shopping channel they carry. Those channels earn them a profit end exclude other more valuable programming.

Worse than excessive ads is the high cost of cable service. Yet our leaders want to deregulate the industry further saying the resultant competition will lower our cost. Even if a competing company shows up tomorrow, it will be a long time before they are wired and offering service. So there's three more years of inflated rates. You should be able to receive all available channels including the premium channels like HBO and Showtime for, I'll venture, about $25 per month. As proof of gouging, why should a pay-per-view movie cost $4.00 or $5.00? You order with no human intervention, and all you really get is a brief computer signal telling your cable box to let you see that channel for the allotted time. Video stores rent movies for the same amount or less, and for that price they must buy the physical tape or DVD, pay their staff and other overhead, and still manage to earn a profit. Cable TV was supposed to get better and cheaper with deregulation and competition, but that hasn't happened.

A popular cable alternative is the satellite dish, but that's impractical for many people and you still pay an inflated fee. With a dish you can't always get local channels, and when you can you must pay extra. And like cable, satellite providers sell channels as a package only, so you have to pay for channels you don't want and miss others you do want. Plus, there's still a potential for abuse: When the satellite service raises their prices next month you must accept it, or forfeit your investment in the proprietary hardware and installation.

There is little chance Congress will act on our behalf to reduce ads or otherwise improve TV. Indeed, after much discussion years ago, all they managed was lame regulation that caused my cable rates to go up instead of down as intended. But we do not have to be powerless either. While lawmakers spin their wheels, we could force rates down today. I am convinced that a consumer boycott would reduce rates to half or even less if enough people agree to participate. We can exist indefinitely without cable TV, but I doubt cable TV could exist for even one month without us.